Growing up on the streets of Newark; Sampson Davis learned a thing  or two about the pressures and struggles of life in the inner city. For the  fifth of six children, drugs, stolen cars, and the abuse he saw at home  where all part of the landscape. “When you are surrounded by that, he explains, your mentality shifts from progression to survival”. And survive is just what he did; by later, making a pact (with two school friends) to  go to college, graduate, and become doctors. Today, Dr. Sampson Davis  is a Board Certified Emergency Medicine Physician, Speaker, and Author.  He spoke with Lingk2us, about his new book “Living and Dying in Brick  City”, where he offers an insightful perspective on the public health  challenges of inner city and a blueprint for survival.

From Street Kid to E.R. Doctor

At the peak of the crack and car jacking epidemic, Davis robbed a local drug dealer and served four months in juvenile detention. The suspended  two-year sentence (shy of his 18 birthday) would become the wake-up  call to change his life. “I remember [as a kid] wanting more out of life.  I would imagine a life beyond the streets of Newark. The fantasy world  I envisioned, was sort of like what Dorothy saw in the Wizard of Oz as  she tried to get back to Kansas. I figured, there had to be a better world  out there beyond what I saw on the streets.

In this environment ambitions becomes limited; your focus becomes having  food on the table, a warm house in the winter, and doing what you can to  make everyday better than the day before. [Nevertheless] as challenging  as Newark was growing up, I credit her for showing me things that I never  wanted to become. When you have concrete images in front of you; you are  not naive to the possibilities. So I made a promise to myself, that if I could  overcome my negative surroundings and make something out of myself;  I would return and bring positivity back to the community. I wanted to be  an oppositional force that challenged the negative images that youth turn  to [because] they don’t have any other choice.”

“As a child, I didn’t see any Doctors, Architects or Engineers. Anyone who came from the community and made it . . . never returned. So when you’re trying to pick out a hero, there is no one to pick from! When a community gets behind a group of young people, it be- comes a community success. If we instill qualities in young minds and let them know that their aspirations for education are sound, they will share that among themselves and their peer groups. [Only when] we champion education will our society move in the right direc- tion. There is so much negativity in the inner city, that we become accustomed to living that way. [But] just because you live in a negative environment doesn’t mean that you have to be. Where you start, is not where you have to end”, Dr. Davis explained. “If schools, as low as grammar school, could create a pipeline where the students hands are basically held throughout high school and college and medical school; just like myself, these Doctors who graduate from these programs will eventually come back and serve.
America’s Broken Healthcare System

Newark’s health system, like many inner cities, is in the midst of significant structural changes. Rollbacks of state funds have intensified competition among health care pro- viders – leading to rash hospital consolidations and several closings.” There is an in- creasing dichotomy between the health care systems in urban and suburban Newark, he explains, most of the region’s economic market power is concentrated in suburban
hospitals all the while, managed care enrollment in the urban areas, has grown rapidly. “We have had a lot of hospital closings over the last decade. So patients over-populate the emergency department for chronic care issues. There is, also, a lack of Doctors that are willing to work in inner city hospitals [for obvious reasons]; but also due to lack of reim-
bursement and the overwhelming number of patients . . . It’s not even the complexity of it, but the sheer amount of the inner city population is massive compared to suburban areas.”

“African-Americans are reluctant to see a Doctor and seek help for mental illness. There are trust issues; i.e.Tuskegee and the Henrietta Lacks experiments. In the inner city culture we would rather go to a friend that had the same symptoms than go to a Physician. As a result, we assume it is the same thing and most often it isn’t… which is dangerous. Many fear being labeled crazy or think their issues are a result of weak spiritual faith.

Spirituality is important. One’s spiritual belief often propels them, but many times mental health issues go unnoticed because of a lack of understanding. There is a stigma that comes along with telling someone you have bipolar disease. It’s different from pneu- monia. But mental illness is prevalent, and exist amongst African-Americans. In the inner city communities our thought process is to address these disorders by going to see our Pastors. We definitely need to seek the spiritual guidance our Pastors provide, however, Pastors are not trained to deal with this. A lot of the madness we see (drugs, shootings, abuse) are the end result of mental illness or mental strain that has not been addressed, and was left to flourish and wreak havoc.

“As an emergency medicine Physician, I often see the terminal stages of illness. Patients decide to delay treatment or use home remedies, only to show up at the hospital when it’s to late. So I am hoping to empower people to have a voice and ask questions of their doc- tors. I want to see the patient with terminal cancer come in at the beginning stages so we can cure them. I don’t want to see the person with diabetes or high-blood pressure die at 45 years of age. I want them to understand, that although this is part of their genetic makeup, they can get better through proper diet modifications and exercise.”

“Many Doctors have done a poor job of being part of the community. We have become a gas stop along the way. I thought the best way to transfer information was through stories. The American culture is one of storytelling. We enjoy good stories around the campfire, or learning about our heritage at a family reunion. It’s how we get to know our history and our culture. Through the sharing of stories we learn about people and their experiences…. by the end of the story, we’re interested and intrigued. We remember and hold on to those stories. Providing a health aspect at the end of the chapter, allows us to consume and digest that information. I felt this was the easiest way to keep patients en- gaged from one page to the next. Brick City is part memoir, part socialism, and self-help book. There is no clear distinction between it being self-help versus memoir. A lot of people didn’t think it could be done, but I stuck to my beliefs and my passion…so far
the response has been tremendous.”

I have always tried to be a better me. This book is just a continuation of that process. I’ve learned that we all have something to give. If we don’t try to find that part of us we will miss out on what life really has to offer. When you look at the summary or your full body of work, you want it to say that you tapped into something you were passionate about. I thought I was just going to be a Doctor and that was enough. I didn’t realize that writing and public speaking were also waiting for me. Once you start to walk in the direction of your goals, you don’t fully know what’s on the other side, but once you reach your destination… it’s like being on top of the mountain. The first book was met with such positivity, I was able to move onto the other books. Brick City is my way of saying I can’t see every patient, but I can give you a formula or a prescription for your life. My hope is that I can erase some of the trust issues, the apprehension and the fear of the medical system. I want patients to know that they are in charge of what they want their health to be. There is no finish line. There is always more to be done. And that keeps me alive, it keeps me hungry for life.”

“The Pack” (as they are fondly known) still travels the country and speaks individually and collectively to various groups. The “Three Doctors Foundation” an organization geared to- wards health, educational leadership, and mentoring with positive peer pressure challenges – will on May 3rd, celebrate its’ 13th Annual Gala; honoring Dr. Sissy Houston;
“The Derek Jeter Foundation” and Michelle Gaston Williams (Diversity Group Executive).
“I enjoy traveling, reading, exercising and spending time with family and friends” said Davis. “I have promised (myself) over the last five years to pick up Golf, so this is going to be ‘the’ year! he laughs. “Getting away helps me to reset the hard drive, the challenge of being an optimist, is you’re always trying to find the good in it all”. 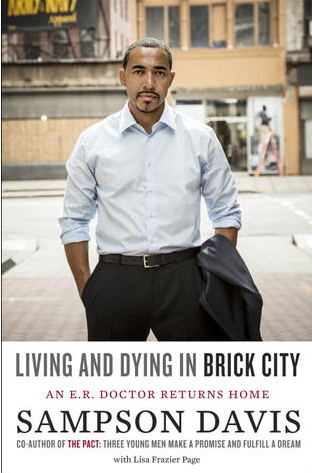